CURRENT NEWS: Tompkins Square Records will be releasing a Entourage retrospective in the Fall of 2017, consisting of 3 CDs, 1 vinyl lp, and a booklet. 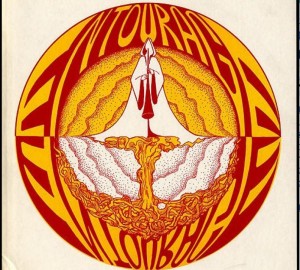 The Entourage Music and Theatre Ensemble was formed in Baltimore, MD, relocated to Millbrook, NY, and finally settled in New London, CT. They were active from 1970 to 1983. Their music was based on flow energy and the dream state experience. During their career, they recorded two brilliant albums for the Folkways label, “Entourage” (1973) and “The Neptune Collection” (1975), as well as a half hour film for NETV “Ceremony of Dreams” in 1978. All of them can be now considered as true visionary, cult albums. Built on lengthy acoustic improvised ecstatic pieces, these albums approach the universe of avant-garde theatre and dance. In 1976, the musical collective was commissioned by American choreographer Murray Louis to create the music for the ballet Cleopatra for The Royal Danish Ballet. They have been recognized for their magic live performances. The band featured Joe Clark on saxophones and keyboards; Rusti Clark on viola and guitar; Michael S. Smith on drums and percussion; and Wall Matthews on guitars, keyboards, and percussion. This is “profoundly moving avant-garde experimental pre-ambient music, offering a variety of instrumentation with a nice hermetic-poetical-exotic flavour”.*